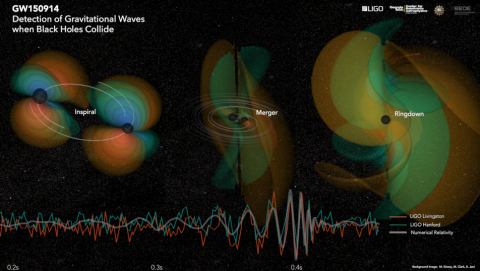 Georgia Tech’s Partnership for an Advanced Computing Environment (PACE) recently deployed a cluster to support the Nobel Prize winning Laser Interferometer Gravitational-Wave Observatory (LIGO) project. This project observed the first gravitational waves from the merger of two black holes, and, in doing so, confirmed Einstein’s predictions according to his theory of general relativity. Beyond the addition of new computational resources, this pioneering work is the first step in integrating Georgia Tech into the Open Science Grid (OSG national computational grid that provides shared resources to run massive numbers of small computations.

PACE started working on building a LIGO resource at Georgia Tech shortly after the arrival of Dr. Laura Cadonati, professor of Physics in the Center for Relativistic Astrophysics (CRA), in 2015. The initial proof-of-concept infrastructure was able to accept test jobs from OSG for testing. This initiative yielded great insight into the process of integrating into OSG, and was disseminated to other institutions such as Syracuse University, who subsequently was able to deploy their own cluster. Based on this successful test, Cadonati procured a new cluster to run production level LIGO workloads. In deploying this cluster, PACE partnered with a team of experts at the University of Chicago led by Senior Scientist Robert Gardner to adopt the latest advancements in OSG system and software stack.